We are interested to hear from the community on the format of a two day Interledger summit. The purpose of the summit is to encourage building, sharing and learning. New developers are welcome and developers at Interledger companies are invited.

Register for ILP Summit here. Applications available via link in the eventbrite description section. Applicants approved will receive registration code. All are welcome to apply!

Independent developers can also propose a discussion or project.

All attendees vote on what they would like to participate in.

What would you find beneficial to you? Do you have recommendations on format? What talk/workshop would you propose or want to see? This event belongs to the community. Please share in the comments.

Note the space has a presentation screen and allows seating for all attendees. Meaning there is flexibility to format. There can be a main stage presentation focus or we can break out the space with tables for dedicated talks. In total there can be six discussion areas for simultaneous events that can be distributed throughout the space; three tables in the main space and three break out areas throughout the venue.

That is a great idea. Although I am not a developer, per say, I currently only implement and run the tech. Would be good to hear 1st hand what is being proposed, and meet others within the community to create a better understanding and develop possible closer ties with other participants. Always wanted to go to San Fransisco. Can you make sure there’s a 49ers game on at the time

What would the target time frame for this be?
Im guessing location is in SF/NYC?

There have been many changes and things are still evolving, so I’d think a format would at least start with a “confirm everyone is up to the current speed”… then move forward from there.

Do you have recommendations on format? What talk/workshop would you propose or want to see

I’ve had good experience in the past with the Unconference format.

Additionally, I would like to give a brief overview of both Hyperledger Quilt (an implementation of core ILP libraries in Java) and the Java ILP Connector implementation that I’m building. I’m hoping to demonstrate JS/Java/Rust interoperability, too.

It would be interesting to get a walk trough of what needs to be built to aid in the adoption of Interledger.

I envisage an overview which lists out the different categories (eg. connector, wallet) with details about:

Any ideas to provide financial incentives for adoption?

I’d be happy to give a talk/workshop on relevant ideas in networking (sort of similar to how I started a thread on the mailing list regarding internet papers + Interledger). The difference here would be a focus on topics like traffic engineering, and how today’s biggest companies scale (i.e. Google, Facebook, Dropbox have all done extensive work here), and how this decentralized federation known as Interledger might scale by any comparison. It could be a design thinking workshop from internet principles, or something on those lines. Could provide a lot of direction for how to improve the protocol, and I think this overlay network is ripe grounds for testing out internet research.

Here are two pretty different ideas for the structure:

1. Collaborative hackathon with one big goal

We have talked for a long time about Interledger needing:

The collaborative hackathon idea would be to try to get the following working by the end of the weekend: a payment from a real wallet to a merchant using the eCommerce checkout experience, with the payment crossing multiple implementations, currencies, and connectors on the backend.

We could use the fact that lots of experienced Interledger developers and newcomers will be on hand to try to tackle all the pieces of this project at once. I would envision breaking everyone into smaller groups focused on particular areas, like wallets, implementation interoperability, ledger integrations, etc, with some people bouncing around a bit wherever help is needed.

Ideally, reaching this goal would also motivate us to put in preparatory work before the summit to maximize our chances of success.

Note that this poll is just to gauge interest. The “winner” here may or may not be used as the final format.

Why not have one day that is more demos and discussion and workshops (to get an overview) and a second day that is a mini hackathon?

I think splitting it up into both would be great. Perhaps Day 1’s discussions will influence the product produced in the second day.

What would you find beneficial to you?

Open ended technical Q/A in one of the areas. Design collaboration.

What talk/workshop would you propose or want to see?

Here are two pretty different ideas for the structure:

I think both are needed, but might be worth considering separate events. I don’t have the data on how ready the community is for a full on hackathon. Would be great to have one and maybe online frequent hackathons can be convenient. For the time being, I think having workshops and technical design sessions are a better option.

As a developer, I would like to walk away with as inspiration/ideas for projects as well as some technical know-how and tools/resources to get started. Also, I would really like to hear about the current state of ILP and it’s future roadmap. It would be helpful to know more about some of the things we can do as developers to help strengthen the ecosystem.

I think a “state of the interledger” keynote would be really useful to get everyone caught up and on the same page.
It could include

Groups working on interledger could give short talks about the work they’ve done, problems faced, and future plans.

A hackathon would be cool but I worry it would devolve into a bit of a bugfest; some of the code is pretty fragile right now.

I enjoy the unconference format and have run them before. One nuance I’d recommend, is to do a hybrid where some content is static and attendees know what they are getting into - such as a state of interledger address, maybe a keynote or panel between known players in the space, and so one. Then time carved out specifically for some break-out sessions and/or the unconference sessions.

I think technology discussions are important, but maybe equally important would be giving time to discussions designed to illuminate the business use cases and what is required to make meaningful progress for the community. In addition, the open legal questions around Interledger. These seem core/critical to interledger’s success and need to be at the forefront of all interledger events as they effect the whole community.

I think it will depend a lot on the learnings of the first day to see what people want to build the next day. We also might get heaps of discussion proposals that may add to day 2. TBD

@vanessadice have I overlooked a date for this event, or that is still TBD?

Here are some of my thoughts on structure:

Workshops: I have really enjoyed some workshops, but it is quite hard to get right. I think guiding developers along the way is a great way to introduce new developers to an ecosystem, but it might not be the best format if most people in attendance are not new to the ecosystem. That being said, I always love a good demo.

Presentations: I would love to see presentations on the history of Interledger, possibly leading into the current strengths and weaknesses of the existing implementations, and briefly touch on future directions. This would also serve as a good placeholder replacement for the existing whitepaper.

I would also like to see presentations on scalability efforts from Strata Labs and some of the challenges they have faced. I have been messing around with Rafiki, and although it is well documented, it would be nice to see a presentation from the team behind it. Some other interesting areas include: security, liquidity exhaustion, wallet design, and possibly regulation.

Perhaps it wouldn’t make sense for an invite-only event, but if it is recorded, it would be nice to see some tangentially related projects present, such as Handshake, Summa One, Cosmos, and how other projects are thinking about value transfer and interoperability.

I know @danrobinson has been an active proponent of ILP, and spoke about it at Stanford Blockchain Conference, so I would love to hear more about some of the work he and others like him have been doing. For example, Starlight channels seem to be a great fit for ILP. How are blockchain companies thinking about ILP? How are existing payment solutions thinking about ILP? Are there any merchants interested in ILP? How do we make it easier to on-board existing developer ecosystems like Bitcoin and Ethereum?

Panel Discussions: Typically, I am not a big fan of panel discussions because they are largely unorganized and lead to only a few talking points and consensus or stalemate. I could see it being interesting in some cases, but for the most part, I do not think it is a good use of time.

Hackathon: I like hackathons, but I am not exactly sure about the format. When I have helped with hackathons in the past, I think it is really easy for people to get overwhelmed. Prizes for bounties and certain criteria are great for incentivizing people, but I am just not sure on how it would be best organized. Interledger is still maturing, but there are still a lot of services and plug-ins that need to be built out. A lot of submissions might prove to be starting points to critical infrastructure, but lack “creativity” because it is “just” a [much needed] wallet integration or what have you.

Side note: If anybody else is like me, I don’t like asking questions in front of a bunch of other people in some auditorium, and certainly not when there is a camera recording it. It’d be nice to have some kind of “ping” system (maybe just a sticky note with included interests like @emschwartz suggested, or just a lobby area with suggested times) to get some one-on-one discussion time with presenters.

@vanessadice
When would you let us know whether the scholarship is accepted or not?

I would like to know that to determine my schedule of April.

Kava Labs would like to have two of our Interledger engineers give a presentation on the development of production grade open-source Interledger tools. The presentation includes a walk through the abstraction models for Interledger plugin creation, the switch-api wrapper and API interface which packages these plugins, the Switch app showcasing a client-side application’s consumption of the api, and areas we view as ripe for future work.

If there is interest, we would also be happy to run a workshop to get developers acquainted with these tools, offer guidance on integration of new plugins (into the api) and encourage modifications of the Switch app, or any of these components, enabling developers to easily compose projects of their own (example below): 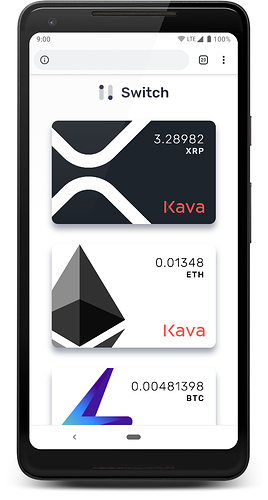